Trying to find a cheap flight can be difficult. Especially if you can not get to the airport too early, and need to take luggage, and want to fly in December. You might end up with a six-hour layover in Oslo.

Now, six hours at the airport is a long time so I decided that even a few hours in Oslo is better than sitting at the airport doing nothing. The train from the airport to Oslo Sentralstasjon (Central station. Half prize student return ticket is 180 NOK = 20€) takes 25 minutes so getting to and from the town requires an hour. Passport control (I came from Britain), security check and general wandering around the airport trying to find the train or the departure gate takes some time as well. So, in the end, I was left with 3 hours and 15 minutes in Oslo.

No snow in Oslo

The Oslo City Centre is small

It is the festive season so I decide to check two Christmas markets in Oslo. The first one is at Youngstorget. The walk from the station along the mains street Karl Johans gate to Oslo Domkirke (Cathedral) is nice and there are lots of stores, cafes and bars. Oslo Domkirke is open for visitors if the shopping centres feel too busy. From the Domkirke another pedestrian street, Torggata, leads to Youngstorget. The street is decorated with Christmas lights that create a starry sky above the people. There is also a fun cafe where I have lunch/dinner. Cafe Sør offers soups, salads, sandwiches, coffees, drinks… It is a cosy cafe with small tables and mismatching chairs. 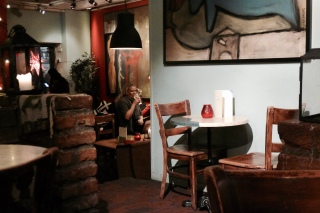 Cosy and fun place to grab a bite

Christmas market at Youngstorget is nice and relaxed. There are several fire pits with stools around them so that visitors can take a break and warm their toes and fingers. Little stalls are filled with handicrafts, gifts and treats. It might be better to have cash, but some do have card machines as well. The prices are quite high everywhere in Norway so be prepared to spend a lot if you go shopping there.

Youngstorget was not too busy

After Youngstorget, I meander towards det Kungelige Slott (the Royal Palace) passing by National Gallery and Historical Museum. The park around the palace, Slottsparken, is dark and quiet at night, almost magical. Lamp-posts around the palace shed some light but darkness surrounds the park. I can hear footsteps on the path and sometimes hear quiet conversations but there are no loud noises. So different from the streets beneath.

Oslo Domkirke in the evening

The street from the palace leads straight back to the Sentralstasjon. The Christmas market in Spikersuppa is on the way. This market is larger and busier. More people, more stalls and less room to move. I buy a hot cup of glögg, add some almonds and raisins in it, and sit down to observe the market and the people. Tourists and locals mix together at the market. Ice rink where a few kids are skating and some teenagers messing around shines a white light and behind it colourful Ferries Wheel reaches to the sky. Time to go back to the airport and continue to my final destination. 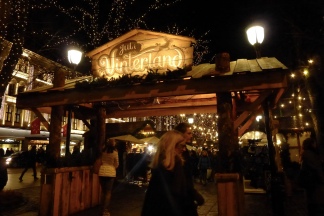 View all posts by Sirri

2 thoughts on “Festive stopover in Oslo”